Rome is an amazing city; watching it in a movie isn’t enough. You can watch travel programs on National Geographic and documentaries on YouTube, but even though they are fantastic, you still need to come and explore the city with your own eyes. But if you have been to Rome, it feels really good and nostalgic to see the well-known sights and attractions as they show up in TV series and movies. If you feel that way, you will enjoy the first two episodes of the third season of the Amazon series Jack Ryan.

Jack Ryan is an analyst who gets in a lot of trouble. You might believe that analysts spend all their time in front of computers, and that is mostly true, except for Jack Ryan. He is out there fighting criminals and stopping terrorists all the time. In the newest season, he is on a mission that takes him all across Europe as he visits cities such as Prague, Athens, Budapest, Vienna, Moscow, and Rome.

I will not spoil the story in this short article, but I do hope I have made you curious enough to watch the first episodes of Jack Ryan. If you decide to stop watching after two episodes, you have given it a try, and you have seen the beautiful shots from Rome showing you attractions such as the Victor Emmanuel II monument, Castel Sant’Angelo, and several other beautiful attractions in Rome.

Even though Jack Ryan is busy saving the world, he still has time to sit down and drink with his friend Jim Greer in front of the Pantheon in the heart of Rome (as you can see in the picture above). Don’t you feel inspired to watch John Krasinski in the role of Jack Ryan right away?

You can read more about the series, the story, and where you can stream Jack Ryan online in the following article in the IP Address Guide.

Would you rather book a trip to Rome and see the city yourself? Tourism has returned, and COVID seems to be forgotten. In other words, come to Rome and explore the city, eat some pizza, and enjoy the most beautiful city on earth!

How much time is needed to watch Jack Ryan season 3?

Would you like to boost your stay in Rome? Why not watch Jack Ryan in your hotel room before going to bed one evening? How much time is needed to stream the full season three? You might want to be outside and eat pizza and see the beautiful Rome attractions instead. Should you, however, decide to stream Jack Ryan season 3, you should expect to spend about 3 1/2 hours in front of the screen. That isn’t a lot of time, but you might be better of watching it at home so that you can spend your time in Rome doing other things that you cannot do at home. What do I mean?

It is possible to visit the Vatican in Rome, but it cannot be done when you go home. What you do in Vegas stays in Vegas is a saying. Well, what you can do in Rome, do it in Rome. If you can do it elsewhere, don’t do it while in Rome! That isn’t a famous saying yet, but it is very true.

Rome is packed with beautiful buildings and attractions. Every street has its own story, and you will be amazed no matter where you walk within the borders of Rome!

Do you know what the Christmas markets in Rome and Natale di Roma have in common? They are now both to be found in our events calendar here in the Rome Guide.

Yes, it was finally about time for us to update our Rome Guide again, meaning that you can once again find information about upcoming events in Rome.

Of course, Rome doesn’t have as popular and famous Christmas markets as many other cities in Europe. But, that doesn’t mean that Rome is boring and there isn’t anything to do in Rome before Christmas.

Would you like to find out more about the Christmas markets in Rome? Click the link for more information!

Do not forget that you can take a look at the events calendar yourself to see what’s going on in Rome. Maybe you are in luck and there will be some great events taking place while you are in town. 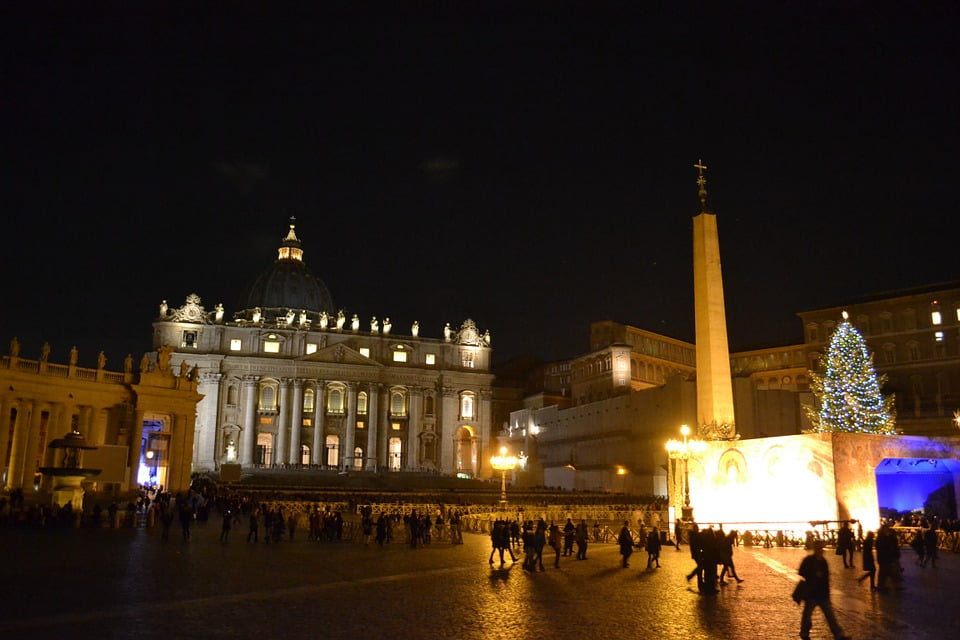 The Christmas tree located at Piazza Venezia in Rome has turned into one of the most famous Christmas trees in the world since 2017. That is when a tree that cost 45,000 Euro looked like a bald person (Spelacchio) with some silver decorations on it. Luckily for Rome, the tree became a bigger success in 2018, and now we are already looking forward to seeing the Christmas tree in 2019.

But, when will the Christmas tree be raised on Piazza Venezia in Rome in 2019? The tree is sponsored by Netflix, and it contains more than 600 spheres, and an amazing number of 60,000 LED lights to make it look beautiful in the evenings.

When will the lights be turned on at the Piazza Venezia Christmas tree in 2019?

The Christmas tree will be at the square from December 8th until January 6th. The lights will be turned on for the first time on December 8th just after it turns dark.

There will be lots of other Christmas trees located all around Rome, and the one in front of St. Peters Basilica is one of the most famous. There are also beautiful Christmas lights everywhere in the central area of Rome, so make sure to walk around to enjoy the beauty of the city in this period of the year.

Would you like with your transport from Fiumicino or the Ciampino airport outside Rome? We can help you with a private transfer that has fixed prices and everything you need. This is a great way to save time before you arrive at your hotel in Rome, and a very convenient solution.