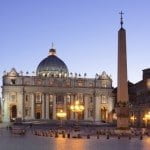 Everyone who come to Rome should visit the St. Peter’s Basilica. Until 1990 it was the largest church in the world, but since then there exist larger churches. But, even though it is not the largest, it is still the most important church in the world. It is own of four arch-basilicas, and even if the Lateran Basilica is the seat of the Pope, the St. Peter’s Basilica is the one featured on broadcasts from the Vatican and important Catholic happenings.

The St. Peter’s Basilica has space for more than 60,000 people on the inside. It is more than 200 meters long on the inside and it is 130 meters high. In addition to the main dome there are also eight others, and the entire basilica was built in the 16th century.

For those who want to visit the dome it can be done using a lift inside the church, or by walking more than 500 steps. If you first visit the church, do not miss out on the beautiful Pieta by Michelangelo coming up to the right almost at once after entering into the church.

It is important to know that to enter into the church you need pants and a normal t-shirt (no singlets, mini skirts, shorts). If you come with such clothes you will have to enjoy it all from the outside.

Pictures from the St. Peter’s Basilica