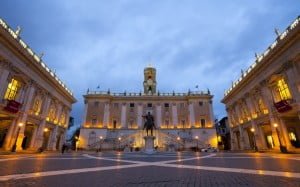 Visiting the Capitoline Hill today you can see ruins from the Roman Empire, but the most important to see is the Piazza del Campidoglio. This square was designed by Michelangelo himself, and in the middle of the square you can enjoy the beautiful statue of Marcus Aurelius (thus a copy, the original statue can be seen inside the Capitoline museum).

One of the three buildings at the square is named Palazzo Senatorio and it originates from the 12th century. Palazzo dei Conservatori, one of the other buildings, is from the 16th century and the newest one is Palazzo Nouvo. Of the mentioned buildings the first two buildings were redesigned by Michelangelo himself in his days. Inside the museums you can see sculptures, art and the famous monument of Romulus and Remus getting fed by the wolf.