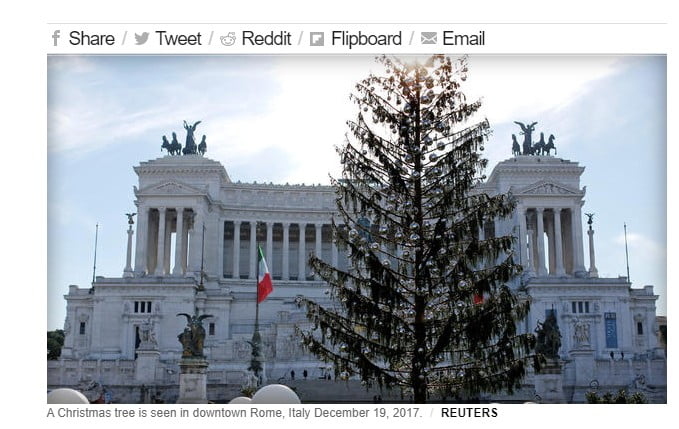 Have you heard the word Spelacchio? Did it has to do with Christmas and Rome and a Christmas tree located at Piazza Venezia? Well, that might be right. But, what is really Spealacchio? Why has it got its very own Twitter account with more than 8000 followers?

So, in the word balding we understand that it is losing its hair, or maybe its fur. The word mangy comes from the word mange, which according to dictionary.com has to do with “any of various skin diseases caused by parasitic mites, affecting animals and sometimes humans and characterized by loss of hair and scabby eruptions.”

As a result, we have a Christmas tree that has been compared to a man losing his hair, or to a person suffering from a skin disease making him lose his hair and get scabby eruptions. Can you imagine what the Christmas tree might have been like?

So, what did the Christmas tree actually look like?

The famous Spelacchio tree from 2017, looked something like this.

As you can see from the picture, this isn’t the nicest Christmas tree the world has ever seen. But, because of all the fuzz, it might actually be one of the world’s most famous Christmas trees at the moment.

The tree has gotten a lot of tweets about it, and many people say it looks like a tree your neighbor threw out a couple of weeks ago because it was so ugly. Well, most people tend to agree about it!

The local government couldn’t explain what had happened to the Christmas tree in 2017, but they said that they would investigate the case.

What happened to Spelacchio in 2018?

One would believe that they wouldn’t make a mistake in 2018 as well. But, that isn’t entirely true. In 2018, they managed to call the tree Spezzacchio, due to the tree being “broken” or “split.” This was due to a special technique they used to make the tree stand like they wanted to. But, in the end, the Christmas tree at Piazza Venezia looked normal in 2018, just like you can see at the image beneath.

So, this is the background and the story behind the Spezzacchio and the Spelacchio in Rome.

We hope you have learned something reading this article. If you want to know more about Rome, about celebrating Christmas in Rome or maybe about the Christmas markets in Rome, look around here in our Rome Guide.

Would you like to have a driver waiting for you at the airport upon arrival in Rome? Check our site where you can book private airport transfers in Rome!

Have a nice day and we wish you a pleasant stay in Rome!