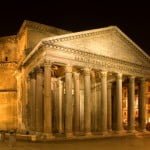 Pantheon is one of the most special attractions in Rome as it is a church with a hole in the cupola/dome. The church was built by Marcus Agrippa in year 27 BC, but the building later burned down. Later they rebuilt it again, but that construction also ended its life in fire. Thus the building we see today was built during the reign of Emperor Hadrian approximately year 126 AD.

The building was first constructed in our of different gods, but in year 609 it was turned into a Christan church by Boniface. Pantheon is today the burial site of several famous Italians, for example Raphael and Victor Emmanuel II.